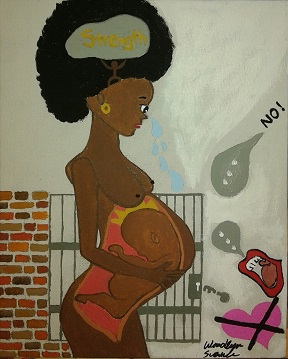 Tears slowly falls down from her eyes
After the doctor says, “Congratulations, you’re having a boy”
Suddenly, a glimpse of the future flashes before her eyes
Revealing the harsh world that awaits her little boy
Unbeknownst to him, the doctor smiles confusing her tears for joy
She forces a smile that fails to convey much joy

Deep in her heart, she knows the burden she’s carrying
Even worst, she fears the burden that awaits her king
She walks to her room and drops to her knees, as she cries out
Calling to God, for guidance for the mission she has to carry out
As she drifts to sleep, she listens to the beating heart of her little king
She closes her eyes, mentally building up strength as she start to sing

Much to her joy and despair, the day has come for her to meet her king
Beyond her control, he arrived two weeks early, impatient little thing
Eager to see the world, he pushes his way out, inch by inch
No longer protected in her womb, she start to push and flinch
She feels deep sadness upon the cutting of the umbilical cord
Mentally, she prefers herself for battle as she sighs, “oh lord”

Little black boy growing up, all he knows is joy, laughter, fun and play
His mother struggles to keep his innocence yet educate him not to fall prey
Prey, to all of the unfavorable circumstances he’s surrounded by
Little by little, his mind starts to grasp the racism and hate as time goes by
Broken jail system already has a cell engraved with his name
As a born criminal, it’s a matter of time before he makes his claim to fame

From the womb, he’s been surrounded by impenetrable walls of bricks
He’s faced with obstacles everywhere he turns
Opinionated voices shout negativity at him which hurts like bricks
The harder he fights, the more difficult the lessons he learns
Within him, anger builds up causing him to react violently to strife
You see, he has much to learn, he’s never been given a first chance at life

He gets his first real taste of the world at the age of thirteen
On a hot summer day, the police got a call and raided his block
Neighbors called the cops for disruptive noise; he was only being a teen
Upon arrival, both hands up, straight at his head, the police pointed his glock
His age or young frame did not make much of an impression
The color of his skin alone was enough confirmation

Feeling helpless, against his better judgment, he made a conscious decision
From now on, he will follow a different lifestyle to react to a similar situation
Somehow, his interaction with the police altered his view of men
He turns to television and music to show him the steps to becoming a man
While one media shows him he has no place in a corporate world
The other shows him all that awaits him in the entertainment world

He now starts to associate sex, drugs, fast cars and guns with being a man
In the process, he builds up disrespect for his fellow black women
He acts out what he sees and never stopped to see things differently
Spreading his seed like wildfire, his babies are raised independently
Looking to change his ways, he struggles to find acceptance
His mother’s love and encouraging words is not enough reliance

What he craves is appreciation from his fellow sisters
But they’ve been hurt to the core; they’re screaming it is too late brothers
Too late for now, does not mean too late forever, put in the effort
Uplift your sisters, and in return their support will grow to your comfort
Black men, look up to your queen and see that you are loved, listen…
From the womb, you’ve been crowned a king, make greatness happen!

Learned and Queer. My Life.

home of the elusive trope

I'm the last words of a slain poet

where all emotions are cared for!

The ultimate guide for independent travellers seeking inspiration, advice and adventures beyond their wildest dreams